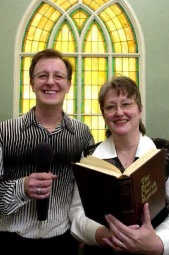 Dave and Kathy Foreman celebrate two marriage dates.
Their first was May 5, 1979. Their second was Oct. 1,
2000. They call that their re-union day, and they call the
music ministry that grew out of it Re-Union Ministries.
The story that connects the two – both the dates and
the couple – is one of faith and hopelessness, love and
despair, anguish and contentment – a virtual spectrum
of human emotions and circumstances.

Most couples wouldn’t want to publicly share such
personal information, and Kathy was reluctant to do so,
but Dave convinced her that what they went through
can help others, and for the past two years they have
shared their story and their music in concert a halfdozen
times.
“He convinced me that we had not gone through what
we went through just for our own benefit, that we had
been put in a place and had these experiences to let us help other people, so I’ve come around to his way of
thinking,” Kathy says.

A woman of few, but well-chosen, words, Kathy is the calm center of this relationship.
Dave is super-charged, loquacious and full of enthusiasm.

When they first met in Bluffton, they were considered “Jesus freaks,” Dave says.
“That’s the term people used. It was the ’70s, and it was in the early days of contemporary Christian music.
What you hear now on standard “Christian” radio, many traditional Christian churches then thought was
heresy,” Dave says. “It was considered demon rock music.”
Dave had long hair and worked at a Christian coffee shop/book store called The Fishnet.

Kathy Reiff had grown up in Bluffton, an only, adopted child. She studied piano from age 5 to 14, sang in
school and church choirs and was a vocalist for a top-40 cover band for a few years after high school. When
she and Dave were introduced by a mutual friend, she had a young son from a previous marriage.
Dave says he was a reluctant and miscast farm boy. At age 5, he was adopted by his stepgrandparents who
moved him from Michigan to their farm near Poneto.
“I was a scrawny little kid who was supposed to be a farm boy, and I got beat up and picked on a lot.” Dave
ended up at Indiana Youth Center, the state correctional facility, at age 16. He finished high school there.
When he was released, Dave went back to his old crowd and his old habits until one night when he was
hitchhiking home.
“Some Christian kids picked me up in their van to give me a ride. I moved in with one of them and his family
in Bluffton shortly after that.”

That association led him to the Christian Center in Markle.
Dave and Kathy were part of a group of young people who did everything together but the two were not
dating. Some were employed; some were not. They had three working cars among them.
“The way we really got together was that one night we had all decided to go to the movies, and then, one by
one, for one reason or another, everybody dropped out except the two of us,” Kathy says. “So we ended up
going on our own.”

“That was our first date, and I didn’t even know it was a date until it was over with,” Dave says.
Well, maybe a little before that – he asked to hold her hand on the way home.
Less than a year later, they were married in the park in Markle. They moved to a tidy bungalow on Fort
Wayne’s near south side in 1992.
Five years later, they separated.
“I had begun to be unfaithful to my wife,” Dave says. “I figured, if I’m not going to be faithful, I might as well
leave the relationship.
Kathy was blindsided – angry and devastated.
After about two months, they got back together, but, Kathy says, “We didn’t deal with any of the issues.”
“We just got back together and hoped it would work out, which was a big mistake,” Dave says.
“I didn’t want to talk about it; I just wanted to put it behind us and go on,” Kathy says.
They stayed together, uneasily, for a year.
“I was looking for an escape hatch, and she was thinking ‘this is as good as it gets, but at least we’re going
to keep what we’ve got, and I won’t lose that.’”
“We both knew it wasn’t working, but we were taking two different approaches to it. Mine was escape,” Dave
says, “and hers was denial.”
David finally said “I’m through with my marriage, I’m through with church, I’m through with God, my family,
my friends. I’m going to go start a whole new life as somebody else.”
He moved out right before their 19th wedding anniversary in 1998, but they weren’t divorced until June
2000.
“I had what I wanted so I was in no hurry to go through the legalities,” Dave says. “I really only cared about
what I wanted and what I was doing. The ultimate selfishness.”
Meanwhile, Kathy struggled with explaining to others.
“It was very difficult because I’m a very private person. I had to be upfront and say this is what happened. …
I didn’t want people’s sympathy, but you do have to tell people something. ‘Where’s Dave?’ ‘Well, Dave
moved out.’ ”

Still, she kept hoping for reconciliation. She had been praying throughout the bitter times, at first for
reconciliation and then, as the separation went on, she says, “I just began to pray that God would work in
David’s mind and heart, whatever needed to be accomplished.”
After the divorce was final, Kathy says she finally decided, “OK, this isn’t going to happen; I’m going to move
on.” And then Dave started to phone her, and for the first time, they began to talk about all the issues and
feelings they had pushed below the surface of their relationship.
“One night, God spoke to me and gave me hope. I didn’t know what that meant or where it would go from
there, but it was basically God doing what Kathy did, letting me know that I was still loved.
“This woman was praying the whole time. All I can say is that the prayers of this woman and the intervention
of God made it happen because I was never looking to reconcile. … I was finished with it. But the steadfast
prayers of this godly woman and God’s intervening on my heart,” made it happen.
“She just kept loving me, which is unthinkable. To be hurt that way and treated that way and to still have that
steadfast love.”

They talked throughout the summer and early fall, and by the time they remarried on Oct. 1, 2000, Kathy
says they had either resolved or figured out how to address all the issues they had been harboring. Dave
says they were “brutally honest with each other.”
Communication, forgiveness and commitment are key. It’s still not easy, but it’s vital. They don’t want to
repeat past mistakes.
“Both of us hate conflict and complications, so we never talked about anything when it happened. I would
hold onto everything until I blew up at some point, and then he would run away,” Kathy says. “We never
learned how to argue, so we had a lot of communication issues.”
They went through counseling and Dave says he firmly believes that “God re-established the union he
created.”
“Because I do believe with all my heart, as does she, that God put us together to begin with. We still count
our first marriage as our anniversary.”

Since their remarriage, they have had training and do pastoral-care counseling.
“We are not licensed counselors,” Dave says. “If we feel we’re out of our league, we send them elsewhere.
… Even among Christians, more than half divorce. We’re trying to show there is hope.”

Dave and Kathy recently released two CDs; “The Body Eclectic,” and “Inside Out.”
They both enjoy the theater, eating out or just walking in the park.
“I feel we kept the good and the fun and then went deeper and became a closer couple,” Dave says. “I hate
doing anything without her now. … I think we’re both content.”
“We joke about being in a rut, but we like our rut,” Kathy says.
“I hate what we had to go through, but I wouldn’t trade where we are now,” he says, and Kathy nods in
agreement.

Pluses
Dave: “Her unwavering steadfastness is a blessing. Her faith and how she persevered through all that
(separation and divorce) – that’s one of the major things I admire.”

Kathy: “His care and support. He’s always looking out for me and encouraging me in whatever I do. (He’s)
my cheerleader.”

Peeves:
Kathy: “I’ve got it narrowed down to about 20. (Laughter ensues.) Most of his traits I find endearing, but he
loses things. He’s always looking for something – his wallet, his glasses. It’s a mystery.”

Dave: “I don’t multitask but my mind is in 10 places at once.” (He once reached for his wallet in his back
pocket and pulled out their portable phone. And, the missing remote control? In the freezer.)
As for Dave’s pet peeve about Kathy: “Her procrastination. I’m a planner. I have to know what I’m doing a
month from now. She puts things off to the last minute. Say we have a program to prepare for. The night
before, it’s ‘I don’t ” know this song.’